Recently, I was searching for the ancestors of Anna Maria de Soledad Chaves, who, along with her husband, Jose (Lugardo) Padilla, appears to be one of the early settlers of the Socorro Land Grant. A Jose Padilla is listed in the 1818 Navajo military campaign donation list that I use as an early enumeration of Socorro. Jose Padilla is a common name, so it is difficult to figure out exactly who this person was. I chose an early settler, Jose Padilla who was married to Maria Soledad Chavez. This couple adopted a young Native American child or adult woman by the name of Maria Soledad Rosalia Padilla. Members of the Navajo tribe sold her to this couple, which means that she was basically their slave. We will never know whether she was treated as a member of their family, or just a servant. Stories differ as to how families treated their "adopted children". Once adopted and baptized in the Catholic Church, they were supposed to be raised as Christians. Of course, many families did the least they had to do to honor this pledge, while others felt it was their duty to treat adopted children as their own.

I could not find any other adopted or biological children for this couple.

I found a Tome marriage record for Jose Lugardo Padilla and Ana Maria de Soledad Chaves, on 3 June 1798. I believe this to be the same couple as Jose Padilla and Maria Soledad Chavez. He was the son of Juan Domingo Padilla and Juana Rita Baca; while she was the daughter of Jose Anastacio Chaves (deceased) and Juana Baca. All were from Belen. I found Jose Lugardo's parents' marriage record in Laguna, and was at least able to figure out the ancestry of his father, if not his mother. Ana Maria de Soledad's parents were a different story. Then I came across a record that I believe solved the mystery, and changed the name I had for one of my ancestors.

Since Chaves is the name found among the founders of Albuquerque, I decided to look at the index of the book "Aqui Se Comienza" - a book that I myself contributed two chapters to. The book outlines the descendants of 20+ families. The index showed that Jose Anastacio Chaves could be found on page 100 of the book. On that page, it indicated that Jose Anastacio Chavez and his mother Antonia Baca were godparents in the Isleta Church baptism of Tomas Gallegos. I checked the Isleta baptism and marriage book published by the New Mexico Genealogical Society and discovered this to be correct.

Jose Chaves, the son of Antonio Duran y Chaves and Antonia Baca, was married to Juana Maria Baca, the daughter of Diego Domingo Baca and Juana Duran y Chaves (yes, they were not-so-distant cousins.) Their marriage was in 1758. The baptismal record that showed godparents Jose Anastacio Chaves with his mother was in 1753. The fact that he was baptizing a child with his mother most likely indicates that he was at least an adolescent and probably unmarried. Therefore, I believe that Jose Chaves and Juana Maria Baca are the same couple as Jose Anastacio Chaves who was married to Juana Baca.

This means that their daughter, Anna Maria de Soledad Chaves, is the sister of Luis Maria Chaves, who was married to Maria Isabel Padilla. This couple is another of the families I've discerned to be founders of the Socorro Land Grant based on the 1818 enumeration. Luis Maria Chaves and Maria Isabel Padilla are my 4th great grandparents - ancestors of my maternal grandfather Santiago Baca. I now know my 4th great-grandfather by a different name.

Below is a chart that shows the relationship between Jose Anastacio Chaves and his 3rd great-grandson Santiago Baca. 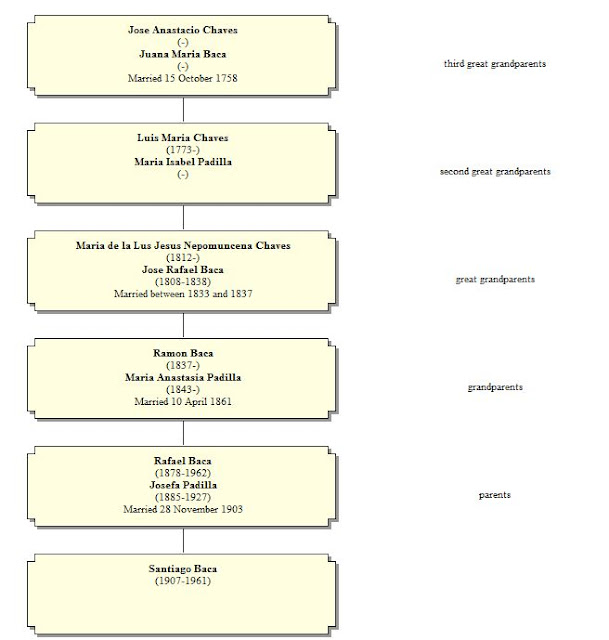 The Socorro Land Grant: A Genealogy of the Founding Families, Part I

Descendants of the founders of Socorro